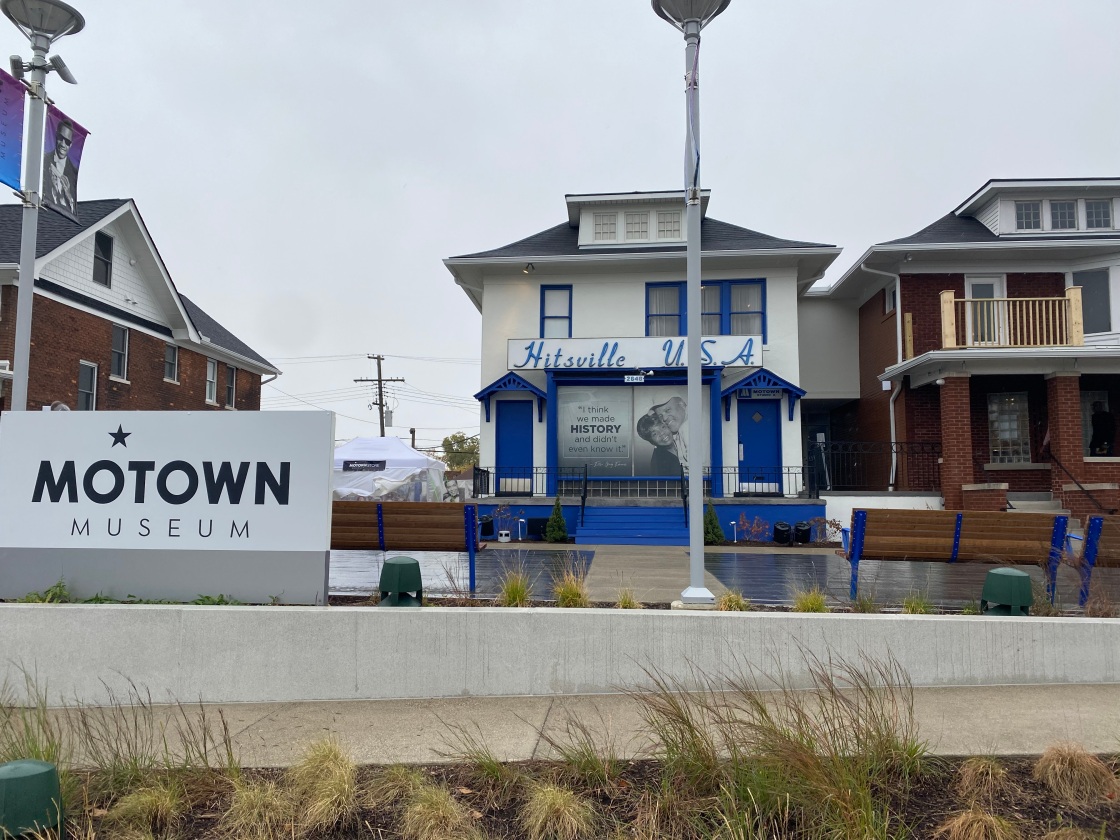 always learning home: being black in the midwest

Geography ain’t innocent. In the U.S. alone, white colonizers stole and spit on land, partly through mapping, naming, occupying, and defining borders with no regard for Indigenous communities. They committed genocide and displacement while also stealing my ancestors from Africa for centuries of bondage.

Within the context of geography, I have long hoped to understand my family history. This summer, I built my family tree. The earliest relative I could locate was born in the 1890s. Because of slavery, it is outright difficult to gather older information. I thank God for family who try to help me find my way. My paternal Grandma, Jeanette, gave me her mom’s obituary the day before I left for a trip to Ghana. My Great Auntie Versy, my deceased maternal grandma’s sister, has been telling me stories all my life.

From Versy, I learned about my family’s migration from Marvell, Arkansas to the Midwest in the ’50s and ’60s. They joined millions of Black people in moving to the North and West for multiple reasons, including the pursuit of factory jobs and escape from Southern racism. Versy, my grandma, and two other great aunts went up to Detroit. My great Uncle Jewel moved to Milwaukee. Later, one of my aunts then moved from Detroit to Chicago to start a decades-long life there. I have some family in Indiana, too, that I don’t know as well. Isabel Wilkerson’s The Warmth of Other Suns is an amazing book about the larger movement.

Without my family’s migration, I would not be rooted in Detroit, a city with the largest Black population in the country. I would not wonder, sometimes, why the Midwest is called such even though it is more eastward than in the middle. I wouldn’t understand why Black folks across this region can still carry and pass down remnants of southern accents.

I was able to ponder and imagine my Blackness, specifically in conversation with “Midwesternness”, while attending this year’s Black Midwest Symposium. The Black Midwest Initiative, founded by Dr. Terrion Williamson, hosts the biennial event of community members, organizers, artists, educators, academics, and more. This year, it was in my hometown. What up doe!

I love being in spaces that stir my gratitude for having my story. I am not fully sure why I was born in this era or why, when my folks migrated, circumstances led them to Detroit rather than some other place. But I am here and planted in possibilities for Black wellness and joy.

While at the Black Midwest Symposium, I felt present. I understood that it was no small thing to sit in a room of people making sense of home. I left holding on to histories and opportunities about and for Black people in the Midwest. Here are some themes from the gathering that reached me:

During the Black Creatives, Midwestern Futures Panel, Chicago-based artist, Stacey Robinson, emphasized that Black people need to protect each other’s imagination. He teaches, draws, and DJs to cultivate physical and intangible spaces where Blackness can thrive.

He told us, “I believe that our liberation has to take place in our Black decolonized imaginations.”

Blackness isn’t monolithic, and this fact extends to the Midwest. Black is rural, suburban, and urban. It is immigrant and stolen from Africa. It spans across ways of living, being, and knowing.

Njaimeh Njie, a Pittsburgh-bred photographer and artist, reminded us to always name people who are important to us. Through exhibitions and public art, she merges memories of family with physical spaces. Other speakers uplifted the impact of blood and chosen family in their lives. Heather Mitchell and her father, Dale, walked us through pictures across generations. Since the 1950s, they’ve grown on land in Southwest Michigan. Through their farm and company, Mitchell’s Blueberries, they cultivate a legacy of gardening and entrepreneurship.

I love the “call and response” that is customary to Black culture. It was refreshing to sit in the audience and be one of many who would Mmhmm and Amen as people shared of themselves. Whenever someone would mention Detroit, I would shout so people knew where I was from. I would look around and notice how people were feeling what was happening through their body language. Learning and feeling are inseparable. The best learning spaces don’t force us to fragment ourselves.

“We can win and we can keep each other. We don’t need to lose each other in order to be successful.”

I was encouraged to continue healing my relationship with myself, those in my community, and the land. Dr. AK Wright, whose work centers Black feminism and healing justice, believes that healing requires listening to our bodies. In St. Louis, Janett Lewis created Rustic Roots Sanctuary to help Black people connect and heal in nature. She wanted to create a hyperlocal space where her community could harvest healthy food and wholly take care of each other.

“We can eat the best food money can’t even buy because we’re picking tomatoes right off the vine,” said Janett.

Black study requires believing that our history is worthy and instructive for our future. Johari Jabir reminded us that it is not inseparable from struggle, joy, liberation, and spirituality. He stated, “The point is not merely to interpret the world but to change it.” David Stovall stressed the necessity of fugitive spaces where Black people support each other in collectively journeying toward new, freer systems.

When I met Baba Jamon Jordan, I marveled at how contagious and inspiring Black study can be. Some years ago, Baba Jamon started the Black Scroll Network, with which he takes people on bus tours around Detroit. Now the official historian for the city, he paints in-depth narratives about key sites, like 12th & Clairmount Street where the 1967 Rebellion started. 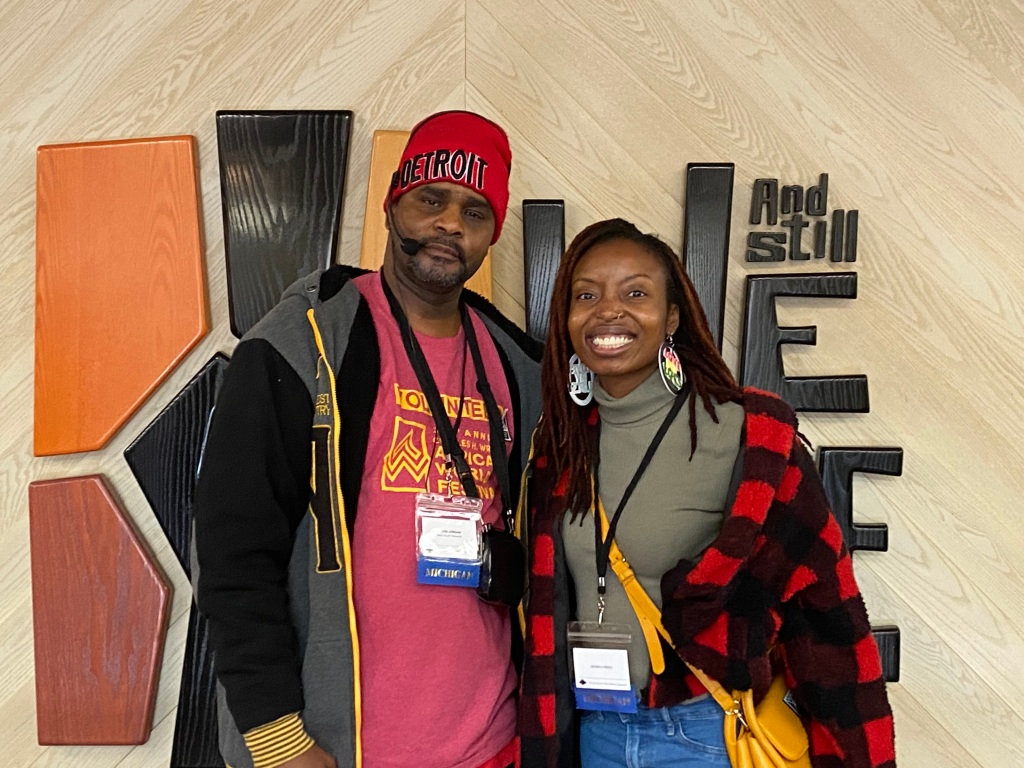 To begin the conference, poet and author Hanif Abdurraqib led a reading and conversation with fellow authors, Aaron Foley and Tamara Winfrey-Harris. These artists acknowledged how Black innovation and creativity in and from the Midwest have long been rich, yet undervalued. Hanif shared stories about loving punk and hip hop music as a kid in Columbus, Ohio. He mentioned how Detroit has the most active rap scene right now, only second to Atlanta. On the note of music, there’s also, of course, Motown, and basements in Dayton were the birthplaces of funk music. Through artistic expression, Black midwesterners, even if they move beyond the region, are archiving these histories and presences.

As always, the weather is wilin’ out up here in Michigan. One day, it’s in the 40’s with snow flurries. The next day, it’s a high of 70 degrees and mostly sunny. My allergies are fed up, and my Vitamin D tank knows winter is coming back real soon. As peculiar and complicated as things can be in the Midwest, it means something to be here, learn home, and carry it with me.

To learn more about the presenters at this year’s Black Midwest Symposium, go here.